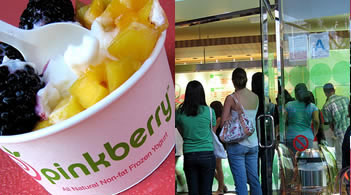 Dubbed ‘crackberry’ by some, Pinkberry is the latest edible craze to hit West Hollywood. So fanatical are consumers, that they’re willing to line up outside the shop to buy some of its famous yoghurt tang. Pinkberry's frozen yogurt is made from real yogurt – fermented milk, and that's it. Unlike many other commercial frozen yoghurts, Pinkberry is sour, tangy, creamy and not overly sweet. Non-fat selections include plain and green tea, flavoured with real green tea powder, and there's an array of toppings on offer. Sugar lovers don’t go uncatered to with toppings like chocolate chips, cocoa pebbles and cinnamon toast crunch. But the main deal is the heapings of fresh fruit such as mango, blueberries and watermelon. Smoothies are also available.

Owned by Sherry Hwang, the Pinkberry concept was developed when Hwang was denied permits to open either wine and cheese shop or small tearoom in her first LA space. So she took inspiration from Korean frozen-yogurt chains Red Mango and Iceberry. The Korean influence is definitely there, in the presentation of the yoghurt and the design of the stores. Pinkberry currently has 5 stores in LA (where the LA Times has dubbed it "the taste that launched a 1,000 parking tickets"), and one store in New York's Koreatown. The Manhattan space is decorated with Philippe Starck's crystal-clear Charles Ghost stools and Victoria Ghost chairs and wavy, repro pendant lights by Poul Christiansen. New stores are being developed in Chelsea, the Upper East Side and Soho. Stressing the purity of 100% yoghurt and fresh fruit, this could be a great franchise opportunity to take outside of the US and Korea.

The comments to this entry are closed.